“We are engaging with diaspora throughtout the year, on an ongoing basis”

Just days before the Pravasi Bharatiya Divas convention in Bengaluru in January 2017, Mr Dnyaneshwar Mulay, Secretary (OIA and CPV), Ministry of External Affairs, speaks to Editor and Publisher Sayantan Chakravarty on a range of issues regarding India’s engagement with the diaspora

The newer immigrants (like to North America, Europe and Asia Pacific) and the older diaspora (from Caribbean, Fiji, East Africa, Mauritius and Reunion Islands, Malaysia, South Africa) need separate engagement models. What are your views on this? 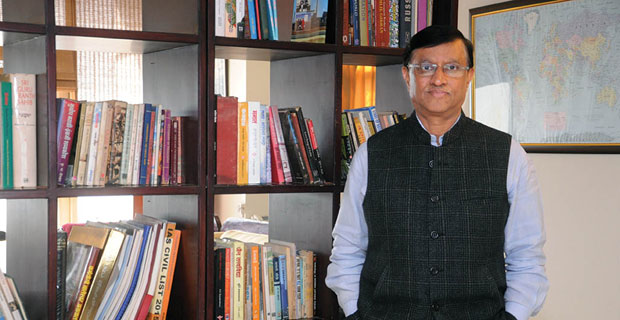 Secretary Mulay at his office in Akbar Bhavan, New Delhi

There is the overall umbrella within which you have diaspora components like in the Gulf, the girmitiyas, the ones in developed countries like in UK, USA, Japan, Australia, New Zealand, Europe, South East Asia. Then there is a diaspora of tourists, NRIs, students and business community. Their numbers are significant. The composition of this particular diaspora is constantly changing and we have to device methods to engage with them. There are nearly half a million Indian students studying overseas, and many of them are future Overseas Citizens of India. We are engaging with the diaspora youth substantially. Similarly our engagement with other diaspora including girmitiyas is very strong. There is a common agenda of connectivity. At the same time there are sensitivities and special needs which we are looking at.

How is the Ministry planning to deepen engagement insofar as diaspora philanthropy in India is concerned, and are more overseas Indians coming forward in this direction?

We have at the Government of India level established the India Development Foundation for Overseas Indians. Even though it was established about nine years ago, its progress was far from satisfactory. We went into the reasons why it had not met expectations, and it led to revamping schemes. We realized that overseas Indians need more assurance, more transparency, in certain cases they needed more tax benefits. They wish to have a sense of ownership of the projects they get involved with. All these issues were examined. Now the scheme is hundred per cent transparent. Acknowledgements are given out on Twitter and Facebook. If the amount they contribute is significant, then there is a photo-op with the EAM. We hold their hands throughout the process and on successful launching of the project there is a signage—they will be invited for the inaugural ceremony. They are welcome to add value in any manner they wish to, by way of intellectual inputs, and even by sharing their thoughts. We now have 100 projects registered after consultation with state Governments, so these states are ready to work with us. We have the FCRA and there are no tax hassles in India. I do not think any other NGO or trust in India will give so much assurance to the diaspora in terms of transparency, hand-holding and assurance.