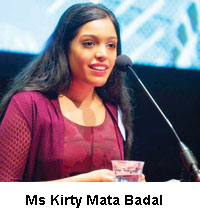 Kirty Mata Badal, a Youth representative to UN of Netherlands. The 24 year old young, dynamic and vibrant Kirty is committed to various social issues. Over the years, she has not only founded her own youth foundation and organised the "Youth Voice Event” but also organised the "Women's World" project, focusing entirely on the issues related to women. For a while now, she has been working on another project called "Faith and leadership” that focuses on young leaders.

Kirty Mata Badal is a Zoetermeer,

Netherlands Leiden resident but considers her a true Hindu and completely believes in philosophy of dharma and karma. She likes to be actively involved in the activities around and is ready to contribute to the society in any way. Kirty has pursued her graduation in Law from the University of Leiden and is now pursuing her Masters degree in 'International public law'. Kirty in the interview with India Empire’s Assistant Editor Misha Singh talks about her personality, experiences and her strong connect to India

Who exactly is Kirty Mata Badal?

I am a 26 years old LLB graduate and currently pursuing my LLM Student Public International Law from the University of Leiden, the Netherlands. I am truly a Hindu by heart, a vegetarian and consider my family the most important thing in the world. In my spare time, I love to dance and “Bharatnatyam” is my favourite. I also love reading staking and painting.

When I stand before God at the end of my life, I would hope that I would not have a single bit of talent left, and could say, 'I used everything you gave me'. – Emma Bombeck. This is the quote I love and try to live by. And the other saying that inspires me the most is - ‘Be the change you wish to see in the World’ – Mahatma Gandhi ji.

What is your connect with India?

Since India is the country of my grandparents, I consider it my home. I can very well say that because that is the feeling I get the moment I arrive at Indira Gandhi Airport. It is the feeling of coming back home. Same culture, same religion, same people with dark hair and same skin colour, same food and I don’t need to constantly explain why I have certain values or habits.

When did your forefathers move to the Netherlands? How many generations of your family have been settled there?

I am the third generation to be born outside of India. In 1902, my great grandparents left India, to work in Suriname for a few years so that they could save money for a better future and return to India. But they actually missed the boat which was going to bring them back home to India. So, they decided to stay a bit longer and also the reason for my grandfather’s growing up in Suriname. Since Suriname became a colony of the Netherlands, they had the opportunity to send their children to the there for better education. My father, along with his brothers and sisters, were sent to the Netherlands in 1974. The circumstances became much better and our family decided to stay. Unfortunately, my great grandparents passed away in Suriname, without returning to India. Same with my grandparents, they also didn’t find a chance come back to their home - India.

You strongly believe in the Hindu ideology which is very rare in people of your generation. What is the reason behind it?

I strongly believe in the “Hindu dharma” but with some common sense and self education. I do not take lectures by priests for granted. In the Netherlands and Suriname, our culture and religion is very well preserved but it has been developed by some people in their own way. But to be honest there are still few groups of Hindus in the Netherlands that are even more conservative and old fashioned then the majority of Hindus in India.

I think the reason behind this is that our great grandparents missed their homeland a lot and to overcome that they did everything to make this new and strange country, look and feel like India. With the stuff they had, they tried to maintain and carry forward everything. They taught their children the importance of the tradition and values so that it could pass it on to their children and never forget where they came from.