The first meeting of overseas Indians with a cabinet minister of the new BJP government of India was held in Nairobi, Kenya, in the last week of June.

This happened when Kenya Indians hosted a reception for Mr. Prakash Javadekar, the Minister of State for Environment, Forest and Climate Change: Information and Broadcasting and Parliamentary Affairs of India. Mr. Javadekar was on his maiden official visit to Nairobi to address the annual United Nations Environment Assembly at the global headquarters of the UN Environment Programme (UNEP). 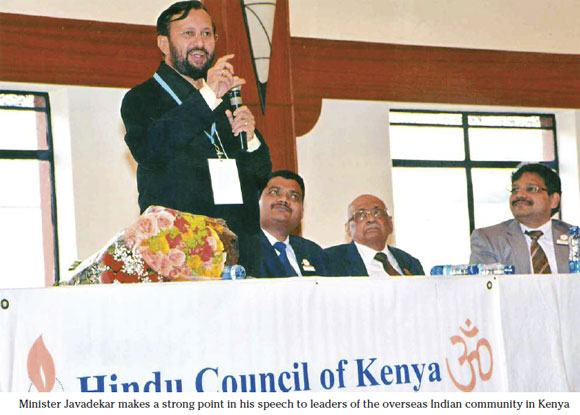 With a population of around 100,000 Indians in Kenya and a strong support for BJP, it was natural for him to address the local Indian leaders. The apex body of Hindu and Sikh religious bodies, the Hindu Council of Kenya (KCK), held a reception at the Shree Navnat Vanik Mahajan Hall for the visiting Indian minister by HCK chairperson Nitin Malde, and national secretary Kamal Gupta. Among the notable guest were: Kenya Member of Parliament for Embakasi South, Mr. Irashad Sumra, the Indian High Commissioner to Kenya, Mr. Yogeshwar Verma, the Convener of Overseas Friends of BJP, Mr. Vimal Chadha, and a former chairperson of HCK, Mr. Swaran Verma. The HCK officials warmly welcome the minister while the Kenyan MP spoke about the cordial relations between the two countries.

Mr. Javadekar greeted the Kenya Indian community leaders and apprised them of the overwhelming BJP victory at the recent general elections. He outlined the challenges before the nation and how the government had embarked to tackle them. 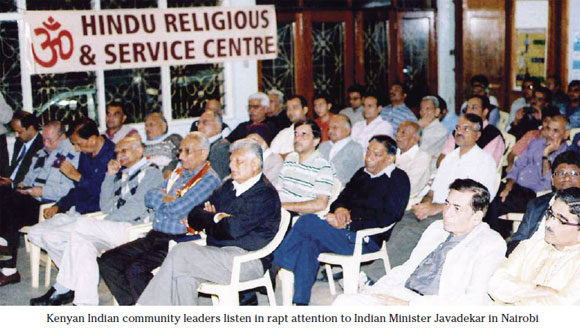 A couple of days later, the Indian cabinet minister visited the Deendayal Bhavan where he met members of the Hindu Swayamsevak Sangh (HSS) and avid supporters of the BJP. He thanked the Convener of Overseas Friends of BJP Mr. Vimal Chadha and all the BJP supporters in Kenya for their enthusiasm and elation at the victory of Prime Minister Narendra Modi who led the BJP to form the new government. Mr. Javadekar mentioned that the task before the new government was daunting and it relied on the support of overseas Indians to project a dynamic image of India.

During the three-day UNEP Assembly, Mr. Javadekar joined 170 delegations from round the globe to deliberate on climate change and serious environmental issue that faced the world today. He said India will remain committed to energy and resource efficient development. India strongly believed in the post-2015 Development Agenda, an agenda which could initiate sustained and inclusive economic growth in all countries, particularly the developing nations. 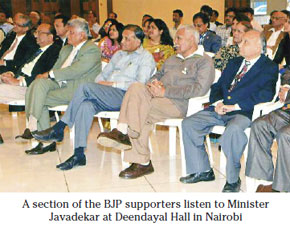 In addition to meeting the UNEP delegates, Mr. Javadekar met the Kenyan President Uhuru Kenyatta and a host of other dignitaries; all of whom extended their best wishes to Prime Minister Modi.