Bangladesh High Commissioner to India H.E. Mr Muhammad Imran hoisting the national flag of Bangladesh on the occasion of historic 7th March at the chancery premises 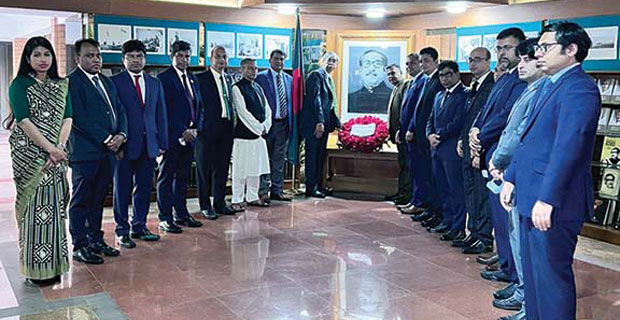 Bangladesh High Commission in New Delhi on March 17 celebrated the 102nd Birth Anniversary of Father of the Nation Bangabandhu Sheikh Mujibur Rahman and the National Children’s Day 2022 with a resolve to work for realising his dream of building “Sonar Bangla.” The day’s programme began with hoisting of the national flag by H.E. Muhammad Imran at Chancery premises. High Commissioner Imran, along with the members of the mission, placed a floral wreath at the portrait of Bangabandhu in the chancery building. Bangladesh Sangbad Sangstha - BSS and Bangladesh Biman of Delhi station also took the floral wreath. In presiding over the meeting H.E. Muhammad Imran said as a nation it was a blessing for us that we could have a world leader like Bangabandhu. There are so many nations in the world who could not achieve independence only because they were not blessed with a leader like Bangabandhu. H.E. Imran said the daughter of Bangabandhu our able Prime Minister Sheikh Hasina is also working with the aim of building Sonar Bangla. A documentary ‘Bangabandhu – Forever in our Hearts’ was also screened on the life and achievements of Bangabandhu Sheikh Mujibur Rahman.