Building up to the ICC World T20 in India, the International Cricket Council (ICC) Cricket for Good and UNICEF in partnership with BCCI launched the Team Swachh clinics during the ICC WT20 Host City Tour in February. This was to promote a nationwide initiative that aims to build a social movement for sanitation and toilet use there by leading to an open-defecation-free India.

The ICC WT20 Men’s and Women’s trophies travelled on the Nissan Trophy Tour float through the streets of national capital New Delhi. Exhilarated fans got the opportunity to photograph themselves with the ICC WT20 Trophies.

A specially designed double-decker bus carried the children from a local NGOs and Indian cricket team players. Yuvraj Singh and Pawan Negi, the Indian cricket players interacted with fans as the cavalcade made its way to photograph themselves with the ICC Trophies. Playing cricket-based games with the children along with advocating the use of toilets, Yuvraj Singh and Pawan Negi engaged with the children when sharing cricketing tips and discussing the importance of hygiene and sanitation in the specially designed Team Swachh WASH clinic set up inside the Feroze Shah Kotla Cricket stadium. 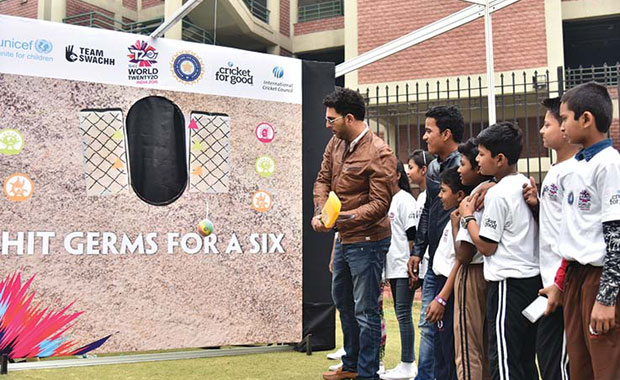 The best way to find yourself is to lose yourself in the service ... more...