NEW DELHI: Prime Minister Narendra Modi in February met the members of the Sikh-Hindu delegation from Afghanistan who came to thank him for their safe evacuation from the war-torn nation along with the Guru Granth Sahib Swaroop. Welcoming the team at 7 Lok Kalyan Marg, his official residence, the Prime Minister underscored the works his government did for the community. 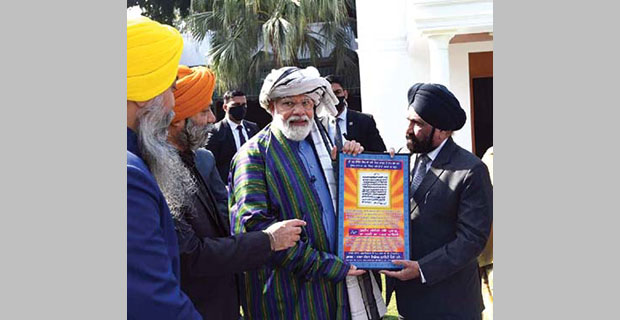 The discussion also included the difficulties faced by them in Afghanistan and the help extended by the government in bringing them to India safely. “In this light, Modi also talked about the significance of the Citizenship Amendment Act (CAA) and its benefits for the community, a release from the Prime Minister’s Office said. He also assured them of continuous support in future as well. Prime Minister Modi also highlighted the significance of the tradition of honouring Guru Granth Sahib, in light of which special arrangements were made to bring back Swaroop of Guru Granth Sahib from Afghanistan. He spoke about the immense love that he has received from Afghans over the years and fondly recalled his visit to Kabul. Delegate member Manjinder Singh Sirsa thanked the Prime Minister for sending help from India for bringing back the community safely, and said that when no one stood by them, it was the Prime Minister who extended timely help. Other members of the delegation also expressed their gratitude to the Prime Minister for the same.

Emotions ran high when they heard him talking about making special arrangements to bring back Swaroop of Guru Granth Sahib from Afghanistan to India with proper reverence, they said. Hailing the PM for bringing about CAA, they said it would help the community immensely. He is not just the Prime Minister of India, but of the entire world since he understands the difficulties faced especially by Hindus and Sikhs across the world and makes all-out efforts to provide immediate help during crises, the delegation members said. Union Minister Hardeep Singh Puri and Union Minister of State Meenakashi Lekhi were also present on the occasion, the release added.