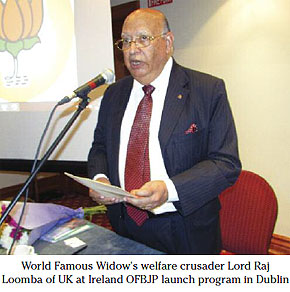 Earlier Ireland Dublin City Council Mayor Hon’ble Christy Burke welcomed and greeted OFBJP Convener Mr Jolly at the local city council hall. Indian Ambassador Ms Radhika Lokesh was also present on the occasion. A book of Dublin in poetry and songs titled “If Ever You Go” was presented to BJP leader Mr Jolly. A Lord Ganesh statue was presented by Mr Jolly to the Mayor.

Lord Loomba in his address stated that in PMs electoral constituency Varanasi in India, Loomba Foundation proposed to empower 5,000 Indian widows for their livelihood. Lord Loomba stated that for this purpose he was willing to donate Rs. 1 crore provided GOI comes forward with a matching grant of Rs. 1 crore for the welfare of widows in India. This was greeted with a loud applause by the audience.

OFBJP leader Mr. Jolly in his short yet forceful speech termed Prime Minister Modi as a “Yug Purush” who has firmly fashioned the absolute victory of BJP and decimation of Congress, Samajwadi and Bahujan parties in India. Despite massive victory of BJP, Mr. Modi has accommodated all partners in NDA by forming an alliance Government in India. This showed the true accommodative and democratic mindset of Mr. Modi. The contribution of Mr A.B. Vajpayee, Mr L.K. Advani and Late Mr K.B. Thakre was also fondly remembered by Mr Jolly in his address.