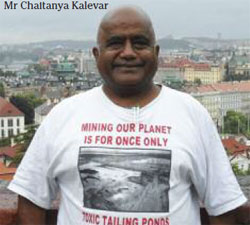 Chaitanya Kalevar, 62 is an Electrical Engineer of Indian origin, based in Canada. He calls himself a “Planetary Patriot” and is active in movements against nuclear energy and climate change. His unique identity and his “quoted t-shirts” is what makes him stand out in a crowd. He is travelling across the world with a vision of spreading the message about the jeopardy of nuclear energy, industrial wastes and climate change. He is a self motivated environmentalist and a lover of mother earth, his upcoming book “Climate change in the Nuclear Age” explains all about him. India Empire’s Assistant Editor Misha Singh talks to Mr Chaitanya Kalevar about his projects and his idea of changing the world

You have travelled the world, attending conferences and taking part in protest marches. How do you raise resources for doing so?

According to you, what is your greatest contribution to the planet?

That I did not work for the nuclear technology industry. It is a multifaceted answer; It could include my life story (laughs). Well my opposition to the arms race was a high priority during the cold war... recently it has been more of speaking for the environment, animal rights and biodiversity.

Gandhiji said that be the change you wish to see in the world. Do you practice that change?

The times have changed a lot since Gandhiji. When he said those lines the struggles were between the people but today the scenario is different. I am standing up for animal rights and environmental change against the people, it is a struggle between the biodiversity and humans. When Gandhiji died in the late 50’s the population of the world was less than 3 billion and the population of India was 300 million and today the population is 7 billion. The thought of species going extinct back then was also unusual but now you have list of endangered and extinct species. I remember of being afraid of being eaten by the tiger as a kid and now am afraid of people eating the tiger.

Who are your heroes and why?

Heroes come from the past and there are no heroes from the past for me. The future struggle is completely different and we have to make our own new heroes.