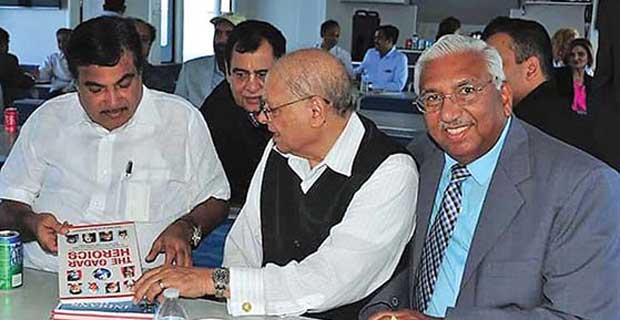 Mr Inder Singh presents copy of Gadar Heroics authored by him, along with books on Indian Americans and Global Indian Diaspora to Minister Gadkari. Also seen is Mr Kewal Kanda

The boat left the Harbor a little after 10:30 am for a tour of the Harbor. Prior to the boat tour, Mr. Gadkari met the representatives of the LA Harbor Port Authority and discussed matters relating to shipping and transportation. Mr. Gadkari also chatted with the local community business leaders who presented him some plans to do business with India. Besides sight-seeing at the LA Harbor, Mr. Gadkari and community leaders enjoyed the interaction with each other. Mr. Gadkari was thankful for arranging this short boat tour where he was able to meet the community leaders. Ashoka the Great Restaurant served the lunch on the boat.

After the lunch, Inder Singh, Kewal Kanda, and Ashok Madan presented Mr. Gadkari a book on Global Indian Diaspora, a book on Gadar Heroics, and compilation of articles, Indians in America by Inder Singh. From the Harbor, the minister went to Los Angeles airport for his flight back to India.