Umbilical relations do stand the test of time. One such was forged with the passage of the FatelRozack from Calcutta to Trinidad in 1845 ... 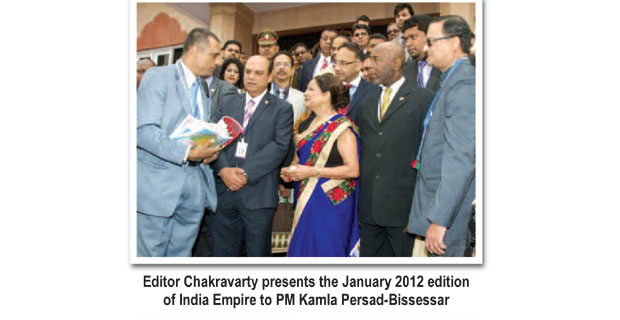 Our magazine’s coverage of the Caribbean has remained strong over the past 16 years. We’ve published several issues dedicated to this region. One of them related to the arrival of Trinidad and Tobago’s then Prime Minister KamlaPersad-Bissessar in Jaipur in January 2012 as chief guest at what used to be the annual PravasiBharatiya Divas. Her entourage was more than formidable with nearly 300 business honchos in tow, and with Trinidad and Tobago’s most famous son, cricketer Brian Lara, and his colleague Darren Ganga playing the role of ambassadors at large. More recently in December 2020 we did a Suriname special including an interview with the country’s Indian-origin President, MrChandrikapersadSantokhi, and did another one on Trinidad in March 2021. The current issue, brought out on the occasion of India’s 75th Independence Day on August 15, once again focuses primarily on Trinidad and Tobago, with honorable mentions of Grenada, Dominica and Montserrat—nations to which our Mission in Port of Spain is concurrently accredited.

We have a cover interview with H.E. Mr. Arun Kumar Sahu, High Commissioner of India in Trinidad and Tobago that gives a varied perspective on India’s engagement in the Caribbean region, including the most recent one involving Vaccine Maitri. We also have contributory and engaging articles, and responses, from Ambassador Virendra Gupta, Ambassador Malay Mishra and Ambassador Gauri Shankar Gupta. All of them served as High Commissioners in Port of Spain in the past. We have an article by Mr Winston Dookeran, a Pravasi Bharatiya Samman Awardee who served as Trinidad and Tobago’s Foreign Minister. We also have a contributory article from Pundit ManiedeoPersad who served as Trinidad’s High Commissioner in New Delhi in the first decade of the 21st century and during whose tenure another famous son of Trinidad, the versatile writer Sir V.S. Naipaul, visited India.