My days in Trinidad and Tobago, a personal recollection 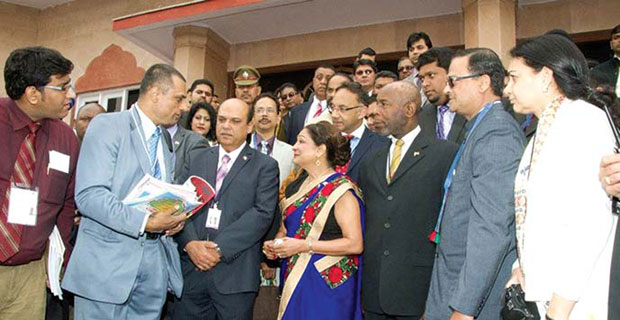 The high-level visit of Indian PM Dr Manmohan Singh in the very first year of my tenure to attend the Commonwealth Heads of Government Meeting (CHOGM) in November 2009 was a great opportunity to handle a VVIP visit from close quarters. The several bilateral and multilateral meetings and interaction with the Indian community of the PM were milestones for me in understanding the intricacies of our bilateral understanding and exploring further avenues to promote them. The other landmark for me was the T&T PM KamlaPersadBissessar’s state visit to India in January 2012 when I had the honour to accompany her. Right from her extremely well received address at the PBD as the Chief Guest to her visit to her native village in Bihar discovered as part of the “Know your roots” programme, the entire visit remains vividly etched in my mind to this day.

Several visits before and after have followed, of Ministers and senior officials from both sides though there has been no high-level visits so far except for a brief meeting of PM Narendra Modi with the T&T PM Dr Keith Rowley in April 2018 in London on the margins of CHOGM. Lack of space constrains me from raving about the fabulous islands of Tobago, a part of Trinidad yet so very different and with a small Indian community forever interested in building ties with India, Grenada, the ‘spice island’, Dominica the ‘nature island’ and the tiny but fascinating self-governing British overseas territory of Montserrat with its live volcano which erupted violently in 1995 to split the island into two parts and led to more than half the population leaving. Montserrat has a current population of 5000, Dominica about 70,000 and Grenada a little over 100,000 and these fall under the concurrent jurisdiction of our Mission in Port of Spain. India has been engaged in multiple ways in engaging these small islands in development cooperation under our ITEC scheme, ICCR’s Cultural Exchange programme, and through bilateral talks and visits of senior officials. St. George’s University in Grenada and Ross University in Dominica provide good opportunities for Indian students from all parts of the world to come and study.

A lot of memories of these wonderful islands come flooding back. Condensing my long term in office over a couple of pages would be virtually impossible. Yet while India goes to celebrate its 75th Independence Day, it is worth recalling that many of the natives in these islands are descendants of Indian indentured workers and hold a symbiotic link with India of which they are extremely proud. It would be good if our government looked at these islands with more care and positivity and engaged them in their development process as well as utilized their position in the strategic Caribbean Ocean close to both South as well North America to seek better leverage.