In the aftermath of Russia’s missile attack on a crowded Ukrainian shopping mall, India has called the deaths of civilians “deeply disturbing” 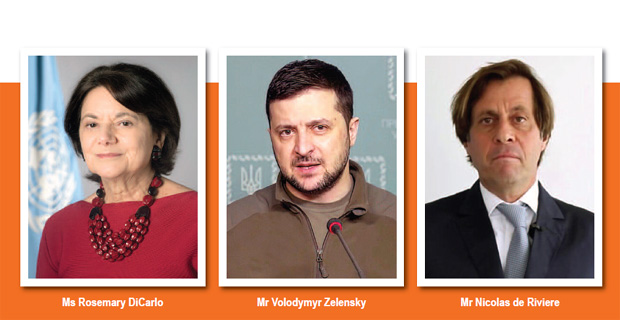 Ukraine’s President Volodymyr Zelensky, who spoke through a video link, called for declaring Russia a “terror state” and punishing it. He said that if any other country had committed the atrocities that Russia had, it would be considered a terrorist state, but Moscow was enjoying the privileges of being a permanent member of the Council.

Since Russia was denying that it had attacked the civilian target, Zelensky said a special representative of Secretary-General Antonio Guterres or a commission should investigate it. Russia’s Deputy Permanent Representative Dmitry Polyansky denied that his country’s missiles had hit the shopping centre and had targeted “a high precision strike against warehouses with American and European arms and ammunition”.

Nicolas de Riviere, the permanent representative of France, said that Russia targeted children, humanitarian workers and journalists, while targeting civilian infrastructure and warned that “war criminals” will face justice. He said that Moscow was using food as a weapon and its actions could push one-fifth of humanity into hunger and poverty. DiCarlo said: “Price shocks in the global food, energy and fertilizer markets are escalating in a world already grappling with the COVID-19 pandemic and climate change”.

Ravindra said: “India is committed to working constructively in mitigating the adverse impact of the conflict on food security”. New Delhi has given financial assistance as well as food grains to countries affected by the conflict, he said. In the last two months, it had sent 1.8 million tonnes of wheat to several countries including Afghanistan, Myanmar, Sudan and Yemen and was helping Sri Lanka, he added. Ravindra said that developing countries were hardest hit by the food, energy and fertilizer crises.

Stressing “equity, affordability and accessibility when it comes to food grains”, he said, “Open markets must not become an argument to perpetuate inequity and promote discrimination”. India was increasing the production of fertilizers, he said.

The world today, more than anything else, is aligned against the oppressors of free speech and the liberty of man. Free speech that, of course, is not of the hateful or the sordid kinds, but the one that expresses the human desire to live and speak without having to feel fear of state reprisal and imprisonment... more...