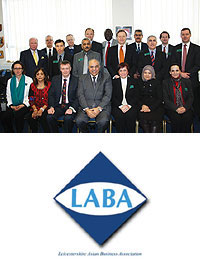 LABA’s President Japsal Singh Minhas hosted a dinner for visiting army VIPS from around the world.

The visit organised by the Cabinet Office is part of the Defence Academy, the internationally renowned Royal College of Defence Studies.

The College prepares senior officers and official of the UK and other countries, and future leaders from private and public sectors, for high responsibilities in their respective organisations, by developing their analytical powers, knowledge of defence and international security, and strategic vision. The course runs for an academic year from September to the following July.

The course builds up to demanding study visits of countries in different regions of the world. Before the members are asked to examine the prospects for these countries, they are given the opportunity to look objectively at the UK.

Each tour consists of some 17 members and one or two staff, including the tour leader. The majority of the tour party will be from overseas.

The aim of the visit said Uday Dholakia, Chairman of LABA “was to examine, at first hand and from a strategic perspective, the prospects for the stability, security and prosperity of the United Kingdom as evidenced by the part of the UK visited”.

Mr Dholakia led a presentation on the role of LABA and the increasingly important role British Asian business communities play as economic drivers for the UK plc in terms of; business growth, job creation, international trade and inward investment.