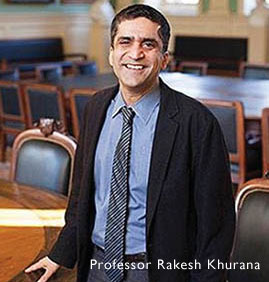 Professor Rakesh Khurana has been appointed Dean of the prestigious Harvard College. His name gets added to a long list of Indian-origin academicians that have assumed leadership roles at renowned global universities.

Khurana, 46, is currently the 'Marvin Bower' Professor of Leadership Development at Harvard Business School (HBS), professor of sociology in the Faculty of Arts and Sciences (FAS), and co-master of Cabot House at Harvard.

He succeeds Evelynn Hammonds, Professor of History of Science and of African and African American Studies at Harvard and will assume his new role on July 1. Harvard College is the school within Harvard University that grants undergraduate degrees. Khurana earned his Ph.D. through a joint programme between HBS and Harvard's Graduate School of Arts and Sciences in 1998. Harvard President Drew Faust described Khurana as a "faculty leader who embodies the interconnectedness" of Harvard.

"His experiences as a graduate student, an award-winning teacher at HBS, and the master of an undergraduate House give him a unique perspective on the University, and his deep respect for the liberal-arts model and the residential education will serve him well as he guides Harvard College," Faust said in a statement issued yesterday. Following the announcement, Khurana said he is "honored" to have the opportunity to serve the College and work with the faculty, students, and staff to create a "transformative educational experience for our students. I am convinced that, working together, we will have a significant and positive impact on the College."

Although Khurana did not attend the College himself, he said, "one of the benefits of being a House master is that you get some window into student experiences." FAS Dean Michael Smith, who announced the appointment in an email to the FAS community, praised Khurana as a scholar and teacher with deep experience working with undergraduates and a strong commitment to the College. He said Khurana is a "distinguished scholar of organizational behavior and leadership" and a dynamic House master who has also deeply engaged with undergraduate issues on important committees. "He brings to the deanship an intimate understanding of the Harvard College experience," Smith said. Harvard Business School's India-born Dean Nitin Nohria also welcomed Khurana's appointment saying his selection is a testament to his skill and vision as a teacher and scholar.

"I think the appointment is wonderful news, and I am looking forward to working with Rakesh to identify and strengthen efforts across the College and HBS that will benefit us all," Nohria added. Khurana earned his Bachelor's degree from Cornell University and began graduate studies at Harvard in 1993, earning his Ph.D.in 1998. He was appointed to the?HBS faculty in 2000 and became co-master of Cabot in 2010. He taught at the prestigious Massachusetts Institute of Technology between 1998 and 2000. Prior to graduate?school, he worked as a founding member of Cambridge Technology Partners.

Khurana's research uses a sociological perspective to focus on the processes by which elites and leaders are selected and developed. He has written extensively about the CEO labor market and business education. He has also been recognised for his commitment to pedagogy, twice earning the excellence in teaching awards and being nominated in 2013 for the Star Family Prize for Excellence in Advising. He has also co-authored "Handbook for Leadership Theory and Practice" (2010) and "The Handbook for Teaching Leadership" (2012), seminal texts on leadership theory and pedagogical practice.