Reaching out to Canada

By Kul Bhushan in New Delhi and Sultan Jessa in Ottawa

A lot of excitement has been generated in Canada by the visit of the Indian Prime Minister Modi, said Zul Dhanji, a financial adviser in Montreal. “India is poised to become a super power in the next few years and may possibly overtake China,” he said, “This will require India to open up to the world. This is going to be a mammoth task. But, it is evident the new prime minister is determined to do this.”

“Modi has already done a lot to boost trade with foreign countries,” said Ramesh Patel, who works for a large and rapidly-growing industry in Toronto. “At one time, we were bogged by filling 16 separate forms. Now, we only have to fill six forms.” 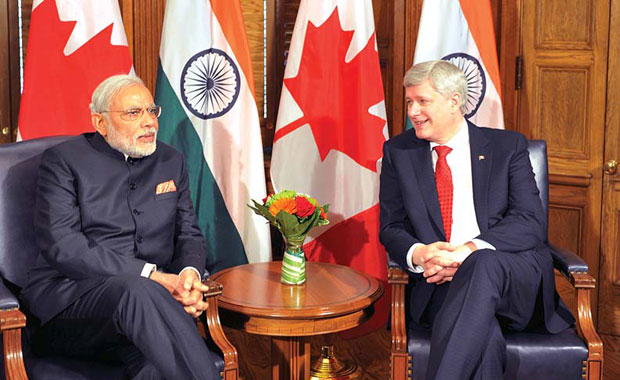 An accountant, Mehboob Karmali, whose parents were born in India, attended the Toronto rally with an estimated 10,000 people. He was surprised by the huge turnout. “I have never seen a foreign leader being greeted so warmly,” Karmali said, “This is a good sign showing that Canada and India are serious about doing business, creating jobs and helping develop tourism.”

Modi met and talked business with Canada’s political, business and academic leadership, and interacted with the Indian Diaspora which now exceeds 1.2 million. No wonder, Canadians have come to regard Modi as a business-friendly politician since he interacted with Canadian businessmen and investors.