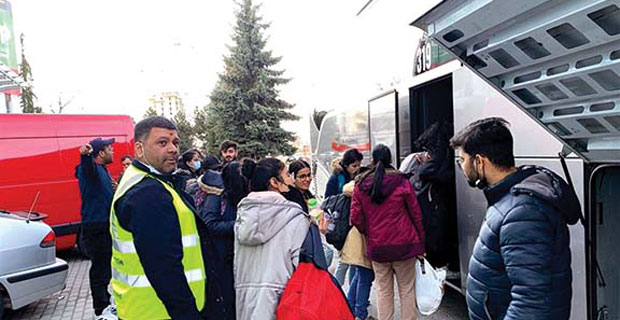 What motivates the volunteers?

Dharmik Sheth, a pharmacy professional from New Jersey who left behind his four-month-old child and wife to volunteer, recalled the words of Pramukh Swami Maharaj who built BAPS into a service-oriented international mega-organisation, “In the joy of others lies our own”.

Trivedi said that hearing those words made him realise “that I had to go there and do something for service. Seva is such an integral part of the value system, the Hindu theological system”. “Personally, I feel that if I can serve any human being, it is like I am serving the Divine, I am getting closer to the Divine.” Trivedi said that he “didn’t see” Ukrainians or Africans or Asians at the border, but he “saw images of my mother, my father, my cousins, my nieces and nephews, my loved ones in their faces, and I realised that this was the best decision I needed”.

From Ukrainian refugees, Trivedi said that he learned lessons of resilience and humility. “Despite all the difficulties they had, they were willing to keep on going and do it all for their children’s sake, and for their country’s sake”, he said. He commended the welcome that the Poles, the military, the people and even children, gave the refugees.

“It was such a heartwarming sight to see that people come together instead of being divided in such difficult moments.”