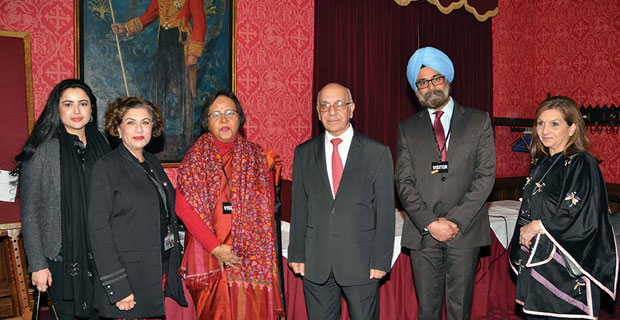 An epic project and powerful movement of gender equality in this decade:

G100 is an empowered group of 100 women leaders from across the world, in 100 diverse sectors, supported by 100 eminent He for She champions called the Denim Club. The group has come together as a philanthropic force for powerful advocacy, awareness & impact across governments and global organisations like the UN, G7, G20 for a gender equal future. G100 comprises a league of luminaries of eminence and excellence including Nobel Laureates, heads of states, ministers, businesswomen, philanthropists, investors, entrepreneurs, corporate and community leaders-a powerful group of women leaders and achievers from all walks of life who wish to give back and move us all forward as architects of the future.

London Meetings of G100 led by Krishna Pujara, said, “It is time that we treat gender inequality as a societal issue instead of thinking of it as a ‘women’s issue.’ The presence of so many influential leaders today, women and men, in support of our common cause bears testimony to the fact that we all choose the change and are ready to put in the efforts required for it.”

Founder & President, G100 and Women Economic Forum (WEF), Dr. Harbeen Arora Rai, said, “Individual small steps and collective giant leaps can propel us toward the balance and change we seek in this decade itself - the decade of action by the UN also slated for the delivery of UN SDGs, notably SDG 5 of gender equality. By the equal and robust participation of women all the SDGs can easily be achieved.”

Krishna Pujara also thanked Lord Rami Ranger and for his unstinting support and commitment to G100 work by joining its G100 Denim Club of leaders. And his support in particular for Anti Domestic Abuse.

Krishna introduced Enfield Saheli and the work of G100 followed by the Commitments for Gender Parity by the Founder President – Harbeen Arora. Krishna informed that she was very pleased to inform that as part of celebrating International Women’s Month, we will be recognising a number of people who have done great work in their fields to make a difference.