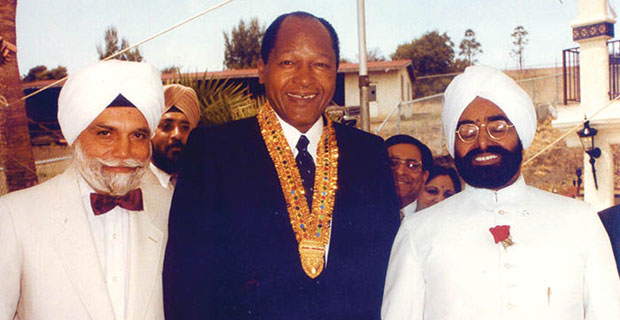 In 1956, young Amarjit had a real experience of how an election campaign was run in the USA. The legendary Dalip Singh Saund was trying to add steam to his campaign as he was trying to get elected to the Congress. Saund’s younger brother had worked with Amarjit’s uncle in the Railways in Lahore. And so Amarjit, excited at the prospect of an Indian contesting and likely to do very well, took two months off from his job at the University of Illinois. Saund was contesting as a Democrat—his official name during the campaign was D S Saund. The man who had done his Doctorate in Math from the University of California at Berkeley in 1924, and then become a farmer in California, was quite a hit with Americans. Partly it had to do with his fair complexion because of which he had a wider acceptability in the America of the 1950s. The other reason was that his wife, Marian, was American. Whatever the reasons, he simply blazed the campaign trail. Saund revealed his full name only after he won the elections, and then went on to serve three full terms. Amarjit Singh Marwah who had a role to play in the background in this significant and trend-setting moment for Indian politicians in the USA was, of course, over the moon.

It was 50 summers ago that Dr Marwah became a citizen of the USA in 1957, one of the earliest modern-day Indian immigrants to do so. Two years into his new citizenship, he took a sabbatical. In 1959, he returned to India, where for 18 months he remained an exchange professor to the Bombay University, a position sponsored by the U.S. Department of Health Sciences. When his tenure got over, he was back in Chicago, a city he was to remain in for eight years.